In November 2021, President Biden forged consensus and compromise between Democrats, Republicans, and Independents to deliver the Bipartisan Infrastructure Law – a historic investment in America’s crumbling infrastructure that will rebuild roads and bridges, replace lead pipes, help provide high-speed internet to every family in America, deliver cheaper and cleaner energy to households and businesses, and produce concrete results that change people’s lives for the better.

Since signing the law, the Biden-Harris Administration has hit the ground running to make major progress.  Already at this early stage, over $185 billion has been announced and is headed to states, Tribes, territories and local governments with thousands of specific projects identified for funding.  Thousands more projects will be added in the coming months, as funding opportunities become grant awards and as formula funds direct states to become specific projects.

By reaching all communities all across the country – including rural communities and historically underserved populations – these investments will position the United States to win the 21st century.  To help showcase the early progress, we’ve compiled two maps.

NOTE: This page has been updated to include adjustments made to U.S. Department of Transportation Federal Transit Administration (FTA) programs to reflect full-year apportionments.

These maps shows how much funding has been announced for work within states, including a breakdown by category of funding. This total includes “formula” funds allocated directly to states for roads and bridges or water systems, for example, as well as specific project funding for airports, ports and superfund site cleanup. Several programs have also announced specific project allocations, including the U.S. Army Corps of Engineers, FAA airport grants, and various other water, wildfire and pollution cleanup projects. A separate tab showcases specific projects. Hover over the dot to see details. 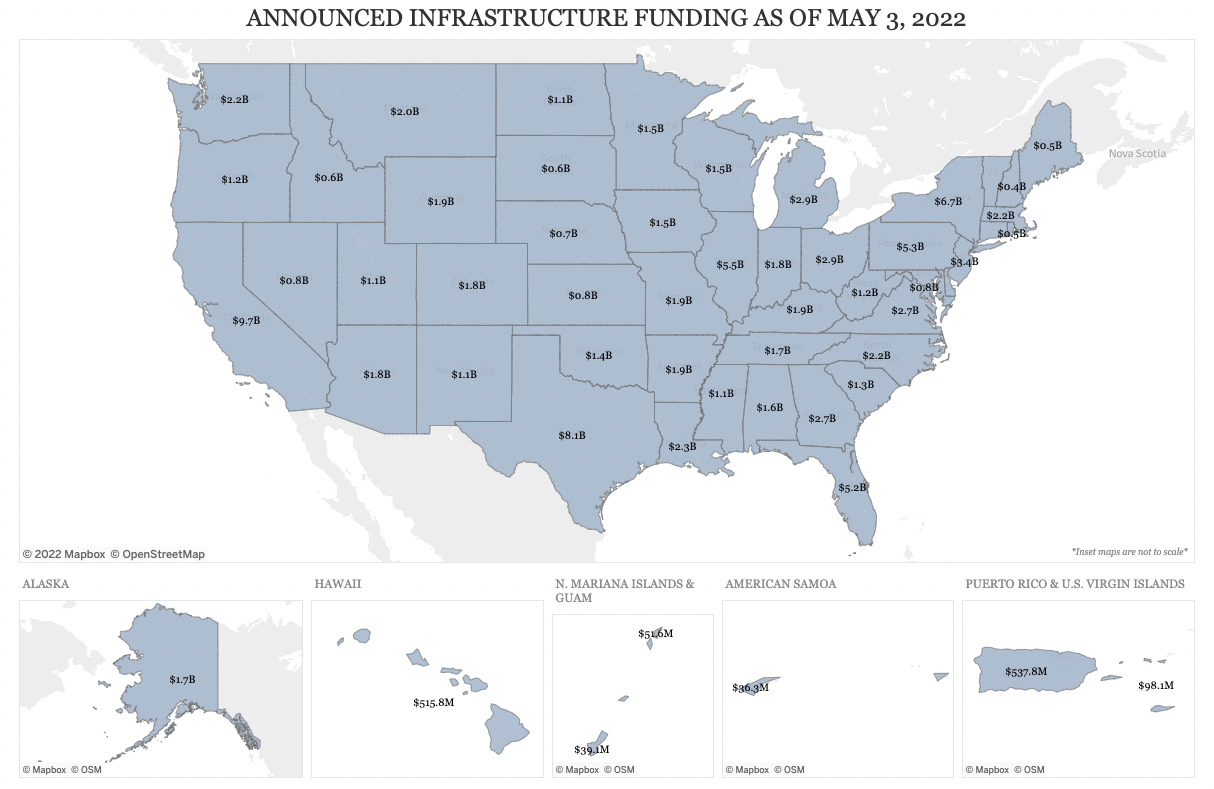 Announced Infrastructure Funding as of October 25, 2022

A note about this data:

These maps are intended to be illustrative of the scope of the Bipartisan Infrastructure Law and the impact it has in all American communities, including yours.

All data represented on these maps, including project locations and funding amounts, is preliminary and non-binding. Awards may be contingent on meeting certain requirements.

Data represents announced funding (formula and discretionary) as of October 25, 2022. This is a small subset of the projects the Bipartisan Infrastructure Law will fund and is not intended to be comprehensive. The source of this information is public announcements by federal agencies.

Locations indicated on “Announced Bipartisan Infrastructure Law (BIL) Project Locations as of October 25, 2022” are intended to be illustrative and do not necessarily represent the primary place of performance or recipient location. In most cases, the location shown on the map is the centroid of the city or county in which the project is located.

The data on the specific projects can be downloaded here.

How Money Flows from the Federal Government

Federal agencies give money for specific purposes. They give to states, Tribes, territories, local governments, private organizations, schools, or individuals. At a high level, the money flows through the following steps. Most programs are now in step 3.

In the coming months, stay tuned for additional details about how the Administration is building a better America and how the law benefits communities in every corner of the country. Please check here for more information about progress in the first year.

The Bipartisan Infrastructure Law funds nearly 400 programs across the federal government. The following programs are included in these maps: