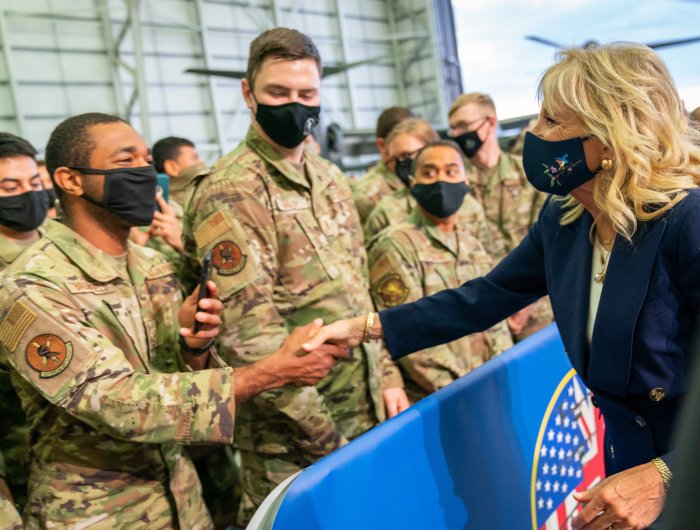 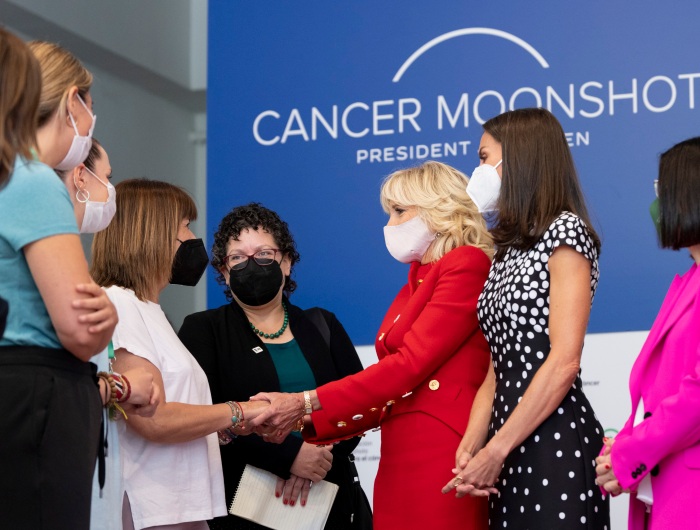 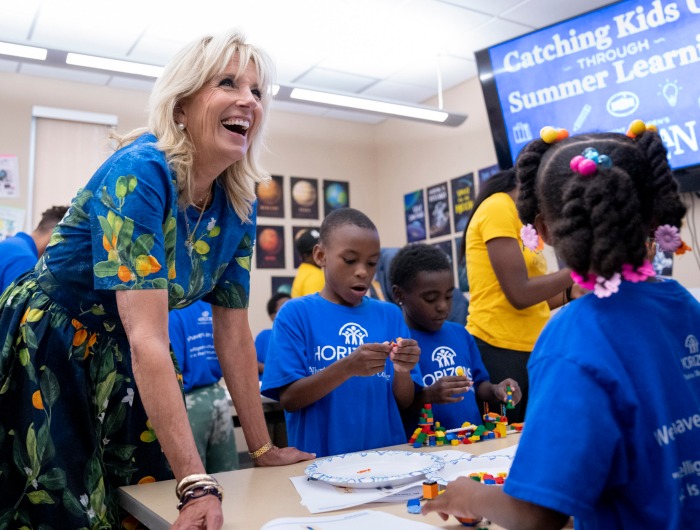 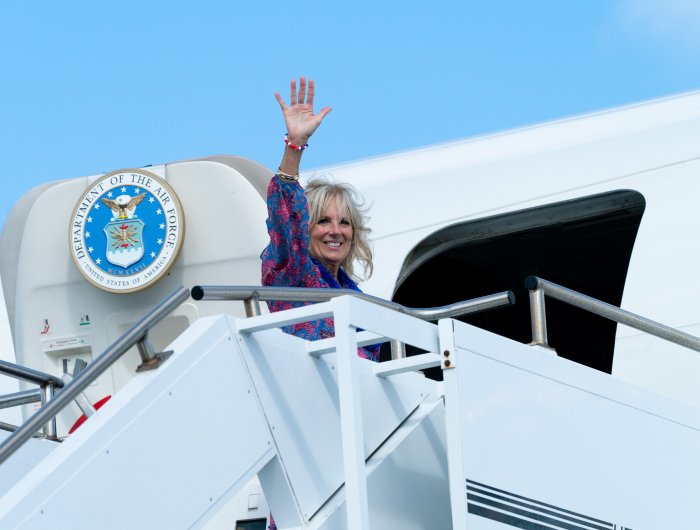 As First Lady, Dr. Biden has focused on reaching out to all Americans, helping to bring our country together.

During her first two years as First Lady, Dr. Biden traveled to over 40 states and territories, over 100 cities, and ten other countries. She has continued championing the causes that have defined her public life: supporting military families, advocating for increased educational opportunities, and working to end cancer as we know it.  She advanced the missions of two key White House initiatives, Joining Forces and the Cancer Moonshot, and also served as a leading messenger for the Administration’s most urgent priorities, including: safely reopening schools after the pandemic’s shutdown, supporting the President’s economic agenda, and urging adults and children to protect themselves and their communities by getting vaccinated against COVID-19.

In the spring of 2021, Dr. Biden announced the next phase and priorities of Joining Forces, her White House initiative to support military and veteran families, caregivers, and survivors. In her first two years, she visited 24 military installations; worked with Joining Forces partners to support over 30 events with the military-connected community; and launched an interagency working group with the National Security Council, which secured over 80 commitments and proposals across the federal government to support military families. Through her Joining Forces work, she has advocated for: increased economic opportunities for military spouses; additional educational programming and support for military children; more focus on health and wellness in the military community; and improved resources for caregivers and survivors, including military and veteran children in caregiving homes.

As a classroom teacher for over 30 years, advocating for increased educational opportunities for all students, of all ages, is close to her heart.  From championing universal pre-school, teacher recruitment and retention, opportunities for career-connected learning, and more affordable options for education after high school, including free community college, Dr. Biden continues her work promoting quality education for everyone.

Cancer affects every community and it’s a common dark thread for so many, including the Biden family.  In recognition of World Cancer Day 2022, the President and First Lady reignited the Cancer Moonshot, laying out bold goals and a vision to end cancer as we know it.  As First Lady, Dr. Biden has continued to work on behalf of American families confronting cancer, focusing on supporting patients and their loved ones during their cancer journeys; urging Americans to prioritize their cancer screenings; and reducing health inequities in diagnosis, treatment, research, and outcomes.

While serving as First Lady, Dr. Biden continued teaching English and writing at Northern Virginia Community College, where she has been a professor since 2009. She is the first presidential spouse to maintain an independent career outside of the White House.

Jill Tracy Jacobs Biden was born on June 3, 1951, in Hammonton, New Jersey, to Bonny Jean Godfrey Jacobs and Donald Carl Jacobs. The oldest of five daughters, she grew up in Willow Grove, Pennsylvania, just outside of Philadelphia. She graduated from Upper Moreland High School in 1969, then graduated from the University of Delaware with a bachelor’s degree in English in 1975.

In 1976, Jill Biden began teaching English at St. Mark’s High School in Wilmington. She then became a reading specialist at Claymont High School. At that time, she was also pursuing a Master of Education with a specialty in reading from West Chester University. She completed her first master’s degree in 1981.

In 1975, she met then-Senator Joe Biden. They married at the United Nations Chapel in New York City in 1977 and she became the mother of his two sons, Beau and Hunter. Their daughter, Ashley, was born in 1981.

Jill Biden taught English at Rockford Center psychiatric hospital while also pursuing a Master of Arts in English from Villanova University. In 1993, she accepted a teaching job at Delaware Technical Community College. During that same year, Dr. Biden’s advocacy for more cancer education and prevention began.  After four of her friends were diagnosed with breast cancer, she launched the Biden Breast Health Initiative to educate Delaware high school girls about the importance of early detection and prevention efforts.

In 2007, she received a Doctor of Education (Ed.D.) in educational leadership from the University of Delaware.  When her husband, then-Senator Joe Biden became Vice President and the Bidens moved to Washington, DC, Dr. Biden began teaching at Northern Virginia Community College (NOVA), where she continues to do so today.

During and After the Obama-Biden Administration

As Second Lady for eight years, Dr. Biden focused on advocating for community colleges, military families, and the education of women and girls around the world.

As the Obama-Biden Administration focused on recovering from the 2008 economic recession, Dr. Biden worked to underscore the critical role of community colleges in the nation’s economy. She hosted the first-ever White House Summit on Community Colleges with President Obama and led the Community College to Career Bus Tour to highlight industry partnerships between community colleges and employers. She also became the honorary chair of the College Promise National Advisory Board, leading the effort to make community colleges free for hard-working students.

The daughter of a Navy Signalman and the mother of Major Beau Biden, a soldier in the Delaware Army National Guard, Dr. Biden has been a longtime advocate for military families. In 2011, she launched the first phase of Joining Forces with First Lady Michelle Obama, a White House initiative to support service members, veterans, their families, caregivers, and survivors. She also released a children’s book in 2012, Don’t Forget, God Bless Our Troops, the story of their family’s experience with deployment through the eyes of Dr. Biden’s granddaughter, Natalie, in the year her father, Beau, was deployed to Iraq.

She continued to advance community colleges and support military families through her work at the Biden Foundation after the Obama-Biden Administration ended.

During her tenure as Second Lady, Dr. Biden traveled to nearly forty countries, visiting military bases, hospitals, and refugee camps, and advocating for education and economic empowerment for women and girls. After the Obama-Biden Administration and now as First Lady, Dr. Biden continues these efforts during her international travel.

After Dr. Biden and then-Vice President Joe Biden lost their son Beau to brain cancer in 2015, they helped push for a national commitment to ending cancer as we know it through the White House Cancer Moonshot. Following the Obama-Biden Administration, then-former Vice President Biden and Dr. Biden continued their cancer work through the Biden Cancer Initiative. Dr. Biden’s New York Times bestselling memoir, Where the Light Enters: Building a Family, Discovering Myself was published in 2019. Her second children’s book, JOEY: The Story of Joe Biden, was published in 2020.