Usually when we see rising wages, the economy is growing. So how is it that April 2020 – the month when the U.S. economy lost 21 million jobs – saw some of the fastest wage growth in recent memory? And if wage growth slows in the coming months, or even goes into negative territory, what would that tell us about the economic recovery? We explain in this blog why we believe that two measurement issues—composition of the labor force and base effects—explain these trends and why average wage data will be easy to misinterpret in the coming months.

In April 2020, the Bureau of Labor Statistics (BLS) reported that year-over-year growth in average hourly earnings skyrocketed to about 8 percent—the highest observed since the series began in 2006. Amidst the worst job loss on record, the extraordinary wage growth was clearly not a sign of a healthy economy, nor evidence that employers had substantially raised wages.

The sharp, one-month increase in reported average wages was because millions of relatively low-paid workers lost their jobs, while relatively high-paid workers remained employed. The shift in the composition of those employed meant the average wage rose. When changes in data are driven by a shift in underlying characteristics—like fewer low-wage workers remaining in the workforce—economists call these composition effects.

A simple example can be helpful. Consider a job market with three earners: Worker A makes $10 per hour; Worker B makes $20 per hour; and Worker C makes $60 per hour. The average hourly wage in this illustrative job market is $30. But suppose Worker A gets laid off. Now the average hourly wage, comprised of just Workers B and C is $40. The average rose $10, not because of wage growth but because the composition of the workforce changed. 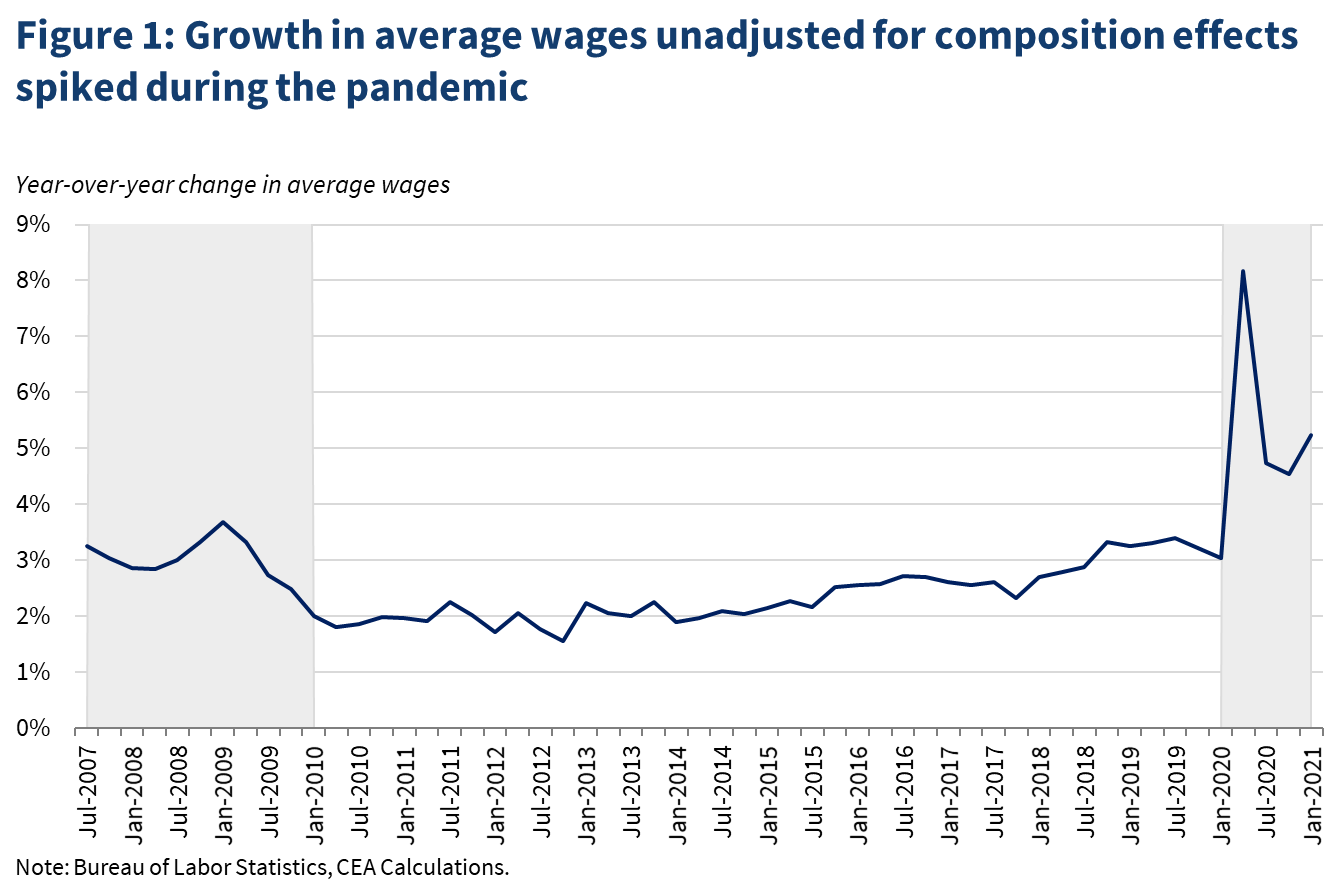 The BLS releases wage growth information as part of its Current Employment Statistics release: those data reflect the change in the average wage for private-sector workers, and so any change in the composition of who is employed affects the change in the average. As Figure 1 (above) shows, that measure has consistently remained high throughout the pandemic (marked by the shaded area on the right) because to-date employment in lower-paid jobs has not fully recovered.

It is common for the average wage to rise during recessions as lower wage workers are often more likely to be laid off than higher paid ones. During the Great Recession, (the shaded area in Figure 1 on the left), the year-over-year change in average wages rose over 3 percent before coming back down.

But the shift during the pandemic recession was much more dramatic than that during the Great Recession due to the unique nature of this downturn: as non-essential face-to-face businesses shut down, there was an historic loss of jobs in leisure and hospitality, one of the lowest wage industries, while at the same time, higher paid professionals could telecommute and experienced relatively few layoffs. Further, the sudden and severe onset of the pandemic and ensuing economic crisis also led to large, abrupt compositional effects. 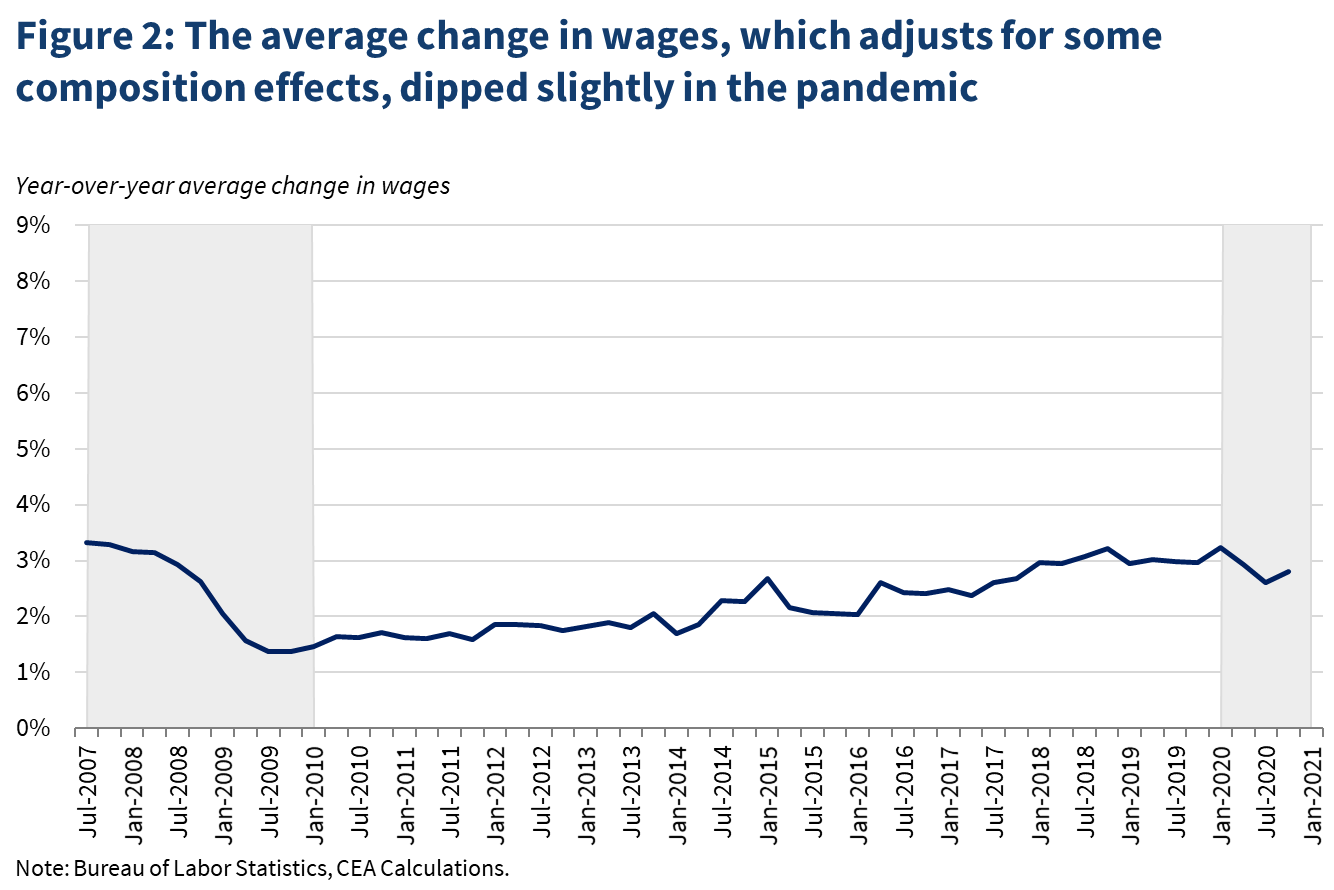 We can understand the impact of composition effects on average wages by analyzing a second BLS measure of hourly wage growth, the Employment Cost Index (ECI). The ECI keeps the mix of employment by industry and occupation constant across time, which prevents it from being affected by shifts between low- and high-wage jobs; that is, the ECI shows the average change in wages within industries and occupations. Note that the data in Figure 2 (above) does not show a spike during the pandemic, but rather that average wage growth had weakened to 2.8 percent at the end of 2020 from 3 percent at the end of 2019. Different compositionally-adjusted wage data from the Federal Reserve Bank of Atlanta also do not show an increase in wage growth during the pandemic.

While average wage growth was unusually high during the pandemic, we expect that it will likely decline dramatically in the coming months because of two effects: base effects and composition effects. These two factors will work in tandem to depress growth in average wages and could even drive the year-over-year change negative.

If we return to Workers A, B, and C, let’s assume that Worker A is now hired back. The average wage would drop back down to $30 per hour. Year-over-year, that is a 25% decline in the average wage from the $40 per hour when Worker A did not have a job. But that large decline is due entirely to the firing and re-hiring of Worker A, which creates a combination of base effects and composition effects that decreases wage growth.

The first mathematical phenomenon at work that will challenge the interpretation of the data is base effects: sudden rises or falls in measured growth due to the level of the starting value. Given the abnormally high average wage last spring we may see an unusually large decrease in the average wage this spring.

To date during this economic slowdown, composition effects have artificially increased the level of average wages, creating the base effect we discussed above. But as the economy starts to recover and lower-paid jobs are added back, composition effects will likely work in the opposite direction, mechanically decreasing average wages. Composition effects could show up both across industry (e.g. the addition of more leisure and hospitality jobs, which tend to be lower paid) and within industry (e.g. hiring back the lower-paid workers in motion picture and sound recording, who were more likely to get laid off in the pandemic than higher-paid workers in that industry).

We explore the combined impact of these two mathematical factors in Figure 3 with a purely illustrative exercise. It shows what wage growth would be assuming all industries return to their pre-pandemic Feb. 2020 employment levels as of Dec. 2021, and that the employment recovery is evenly distributed over the next nine months; we also assume average wages within industries remain at their March 2021 level. In other words, any changes in wages under this simulation are driven wholly by employment-composition effects. This exercise shows muted growth in average wages for the rest of this year, with the possibility that wage growth turns negative, particularly in April. 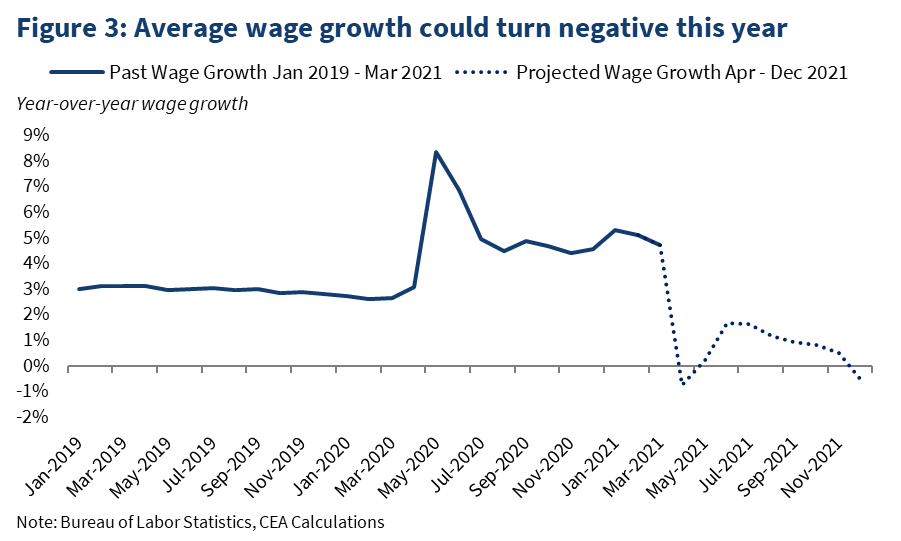 We note that wage growth this spring could be estimated to be even lower if it is adjusted for inflation because measured inflation will likely temporarily rise in the coming months, partly because of base effects (as discussed in a previous CEA blogpost). Whereas wage base effects will dampen measured growth in average wages, price base effects are likely to cause temporarily higher inflation estimates. Prices were suppressed when the pandemic hit, and measured inflation had been weak since. But now because of the weak spring 2020 price levels (and other factors discussed in the previous blogpost), measured year-over-year inflation has increased. Given all these factors, it is possible that reported real average wages could fall faster than we’ve seen before.

Importantly, these computational quirks should not be confused with the experience of the typical worker. Most workers did not receive historic raises in April of 2020, even though that is what average wages suggest. Likewise, the typical worker is not likely to experience the slowdown in wage growth that we expect to see in the upcoming data as the economy improves.

Average wages are being shaped by a number of different factors right now, including but not limited to composition and base effects in wages. It is possible that headline average wage growth estimates will be negative in coming months. However, those negative estimates would reflect composition and base effects depressing the average wage, rather than wage cuts for workers. The Administration is paying close attention to how these influences are affecting the economic data. As the economy returns to normal we expect these anomalies to gradually disappear.