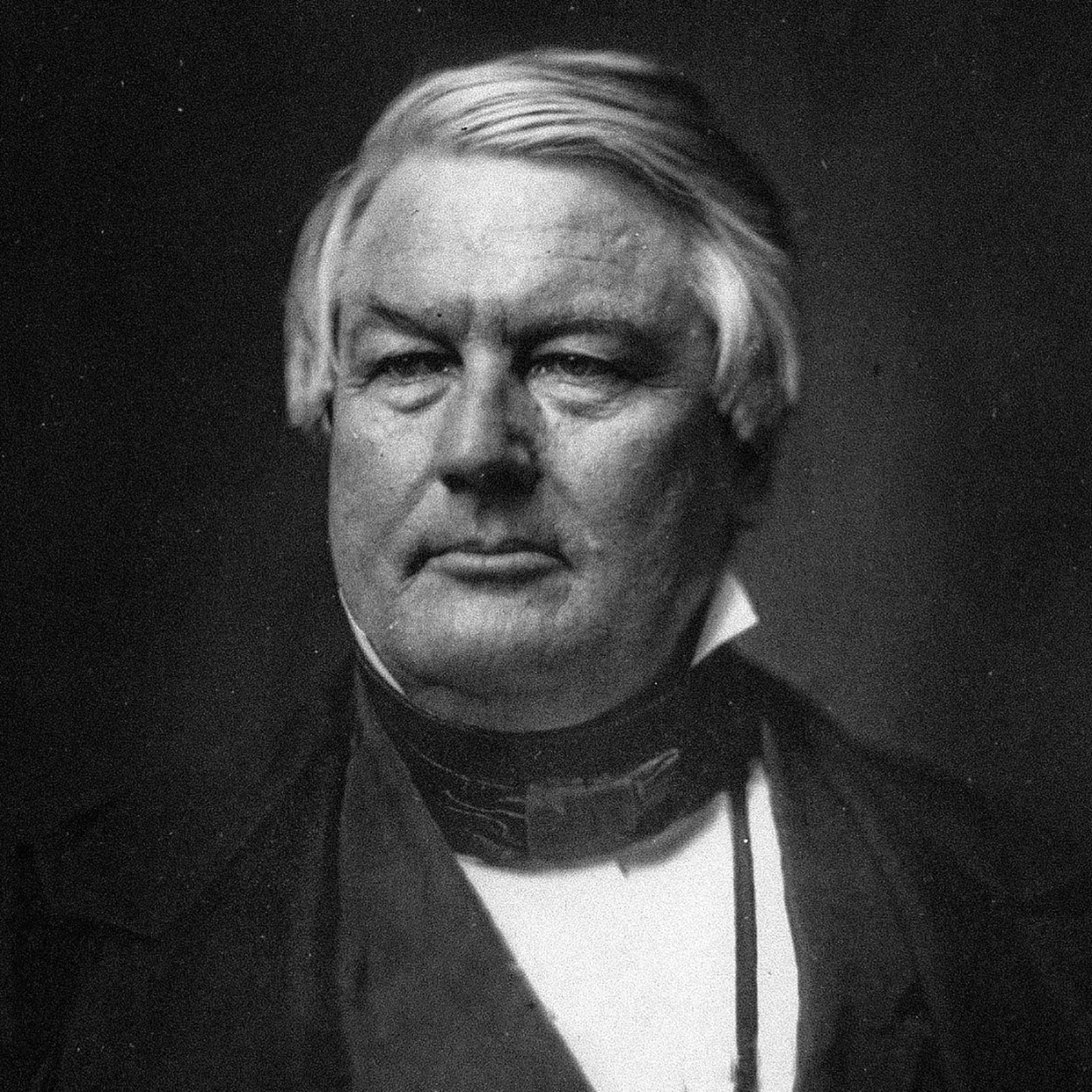 The 13th President of the United States

Millard Fillmore, a member of the Whig party, was the 13th President of the United States (1850-1853) and the last President not to be affiliated with either the Democratic or Republican parties.

In his rise from a log cabin to wealth and the White House, Millard Fillmore demonstrated that through methodical industry and some competence an uninspiring man could make the American dream come true.

Born in the Finger Lakes country of New York in 1800, Fillmore as a youth endured the privations of frontier life. He worked on his father’s farm, and at 15 was apprenticed to a cloth dresser. He attended one-room schools, and fell in love with the redheaded teacher, Abigail Powers, who later became his wife.

In 1823 he was admitted to the bar; seven years later he moved his law practice to Buffalo. As an associate of the Whig politician Thurlow Weed, Fillmore held state office and for eight years was a member of the House of Representatives. In 1848, while Comptroller of New York, he was elected Vice President.

Fillmore presided over the Senate during the months of nerve-wracking debates over the Compromise of 1850. He made no public comment on the merits of the compromise proposals, but a few days before President Taylor’s death, he intimated to him that if there should be a tie vote on Henry Clay’s bill, he would vote in favor of it.

Thus the sudden accession of Fillmore to the Presidency in July 1850 brought an abrupt political shift in the administration. Taylor’s Cabinet resigned and President Fillmore at once appointed Daniel Webster to be Secretary of State, thus proclaiming his alliance with the moderate Whigs who favored the Compromise.

A bill to admit California still aroused all the violent arguments for and against the extension of slavery, without any progress toward settling the major issues.

Clay, exhausted, left Washington to recuperate, throwing leadership upon Senator Stephen A. Douglas of Illinois. At this critical juncture, President Fillmore announced in favor of the Compromise. On August 6, 1850, he sent a message to Congress recommending that Texas be paid to abandon her claims to part of New Mexico.

This helped influence a critical number of northern Whigs in Congress away from their insistence upon the Wilmot Proviso–the stipulation that all land gained by the Mexican War must be closed to slavery.

Douglas’s effective strategy in Congress combined with Fillmore’s pressure from the White House to give impetus to the Compromise movement. Breaking up Clay’s single legislative package, Douglas presented five separate bills to the Senate:

1. Admit California as a free state.
2. Settle the Texas boundary and compensate her.
3. Grant territorial status to New Mexico.
4. Place Federal officers at the disposal of slaveholders seeking fugitives.
5. Abolish the slave trade in the District of Columbia.

Each measure obtained a majority, and by September 20, President Fillmore had signed them into law. Webster wrote, “I can now sleep of nights.”

Some of the more militant northern Whigs remained irreconcilable, refusing to forgive Fillmore for having signed the Fugitive Slave Act. They helped deprive him of the Presidential nomination in 1852.

Within a few years it was apparent that although the Compromise had been intended to settle the slavery controversy, it served rather as an uneasy sectional truce.

As the Whig Party disintegrated in the 1850’s, Fillmore refused to join the Republican Party; but, instead, in 1856 accepted the nomination for President of the Know Nothing, or American, Party. Throughout the Civil War he opposed President Lincoln and during Reconstruction supported President Johnson. He died in 1874.

The Presidential biographies on WhiteHouse.gov are from “The Presidents of the United States of America,” by Michael Beschloss and Hugh Sidey. Copyright 2009 by the White House Historical Association.