The three data releases (Gross Domestic Product, Personal Income, and the Employment Cost Index) from the last two days show how recent policies enacted to support households through the pandemic are helping to boost incomes and spending, providing a lift to the current economic expansion. However, they also are a reminder that there is still more work to be done before the economy and households fully recover.

1. The GDP report showed a strong pace of growth.

The U.S. economy grew at an annual rate of 6.4 percent in the first quarter of 2021 (see figure below on the left). Consumer spending, which accounts for about 70 percent of GDP, grew strongly over the quarter, fueled by job gains and government support. Regarding the latter, today’s income report shows an historically large increase in government transfers to households as economic impact payments went out last month to households.

Spending on goods picked up, which drove most of the acceleration in GDP growth from the fourth quarter of 2020 to the first quarter of 2021, while consumption of services held steady. Net exports continued to subtract from GDP growth, in part due to the faster U.S. recovery compared to that of some of our trading partners. Drawdowns in volatile private inventories subtracted over 2.5 percentage points from GDP growth, partly reflecting disruptions to motor vehicle production and sales.

As the figure below on the right shows, even with last quarter’s strong growth rate, the U.S. economy is still 1 percent below its pre-crisis GDP level – had the pandemic not interrupted the economy’s growth path, GDP would be over 3 percent above last quarter’s level.

2. State and local government contributed positively to GDP for the first time since the first quarter of 2020, partly reflecting increases in compensation. 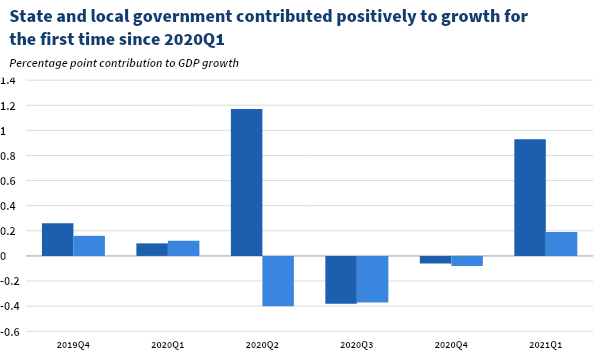 In part due to significant, ongoing government support, personal income was higher in March than before the pandemic, as seen in the figure below. The pace of compensation picked up substantially in March, lifted in part by over 900,000 jobs added that month.  The largest contribution to income during the pandemic has come from government benefits, which grew particularly sharply, up over $300 billion over the month (almost $4 trillion at an annualized rate, as reported in the Bureau of Economic Analysis tables). The combination of income support and decreased spending opportunities has resulted in a highly elevated saving rate of 28 percent in March, the second highest in the history of the series, and much higher than the average pre-crisis saving rate of 7.5 percent. 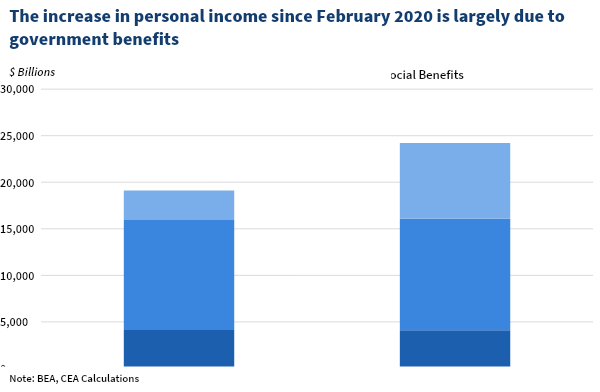 Aggregate compensation (the total of all wages, salaries, and job benefits paid across all employed workers) grew 1.0 percent month-over-month in March. It grew faster last summer as the economy bounced back from the early months of the pandemic, but prior to that compensation had not grown so quickly since the early days of the recovery from the Great Recession. As a reminder, increases in compensation reflect both increases in wages and in hiring. Given current patterns in wages and job growth, this increase in compensation likely reflects hiring picking up more than wage increases. 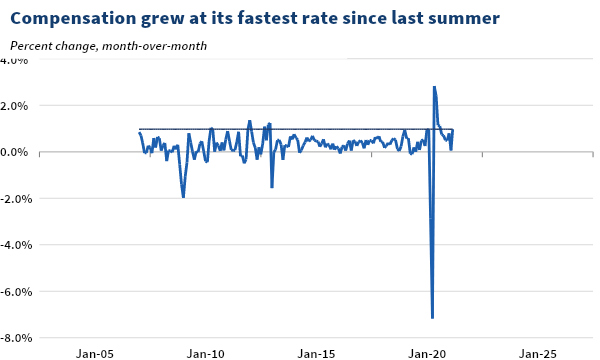 The Employment and Cost Index (ECI) which also came out today also showed an increase in compensation of 2.8 percent year-over-year for private-sector workers, a return to pre-pandemic rates.  The increase was partly due to compensation for workers in incentive-paid occupations in which workers are paid commissions, such as salespeople. The ECI shows that consumer demand is likely feeding back into some workers’ wages, but also that overall wage inflation continues to show no signs of a widespread labor shortage.

5. Inflation accelerated in March for both headline and core measures, but core inflation remains within recent historical norms and below the Fed’s 2 percent target.

As economic activity has accelerated, inflation has responded, with the overall personal consumption expenditure (PCE) price index up 2.3 percent year-over-year. Inflation will likely continue at higher rates over the next few months, reflecting both base effects and supply-demand mismatches that are expected to be transitory, as discussed in a previous CEA blogpost. Core inflation, which strips out some of the volatility from food and energy, remains below 2 percent, and is is below where it was a few years ago. 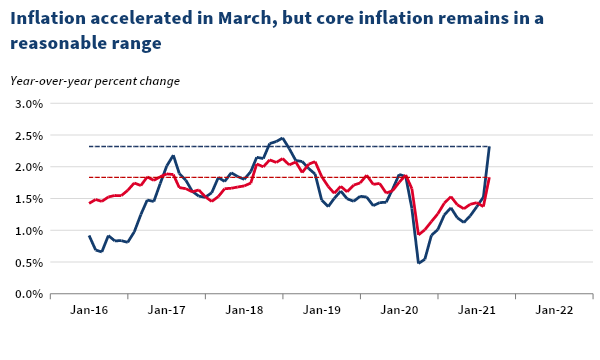 In conclusion, the data releases from the last two days show an economy that is improving, in part thanks to public health measures and government support, but that is not fully recovered. Currently, the data are consistent with an economy that is expanding without generating lasting or excessive price pressures, but the Council of Economic Advisers will continue to monitor the data as the economy recovers from the pandemic.