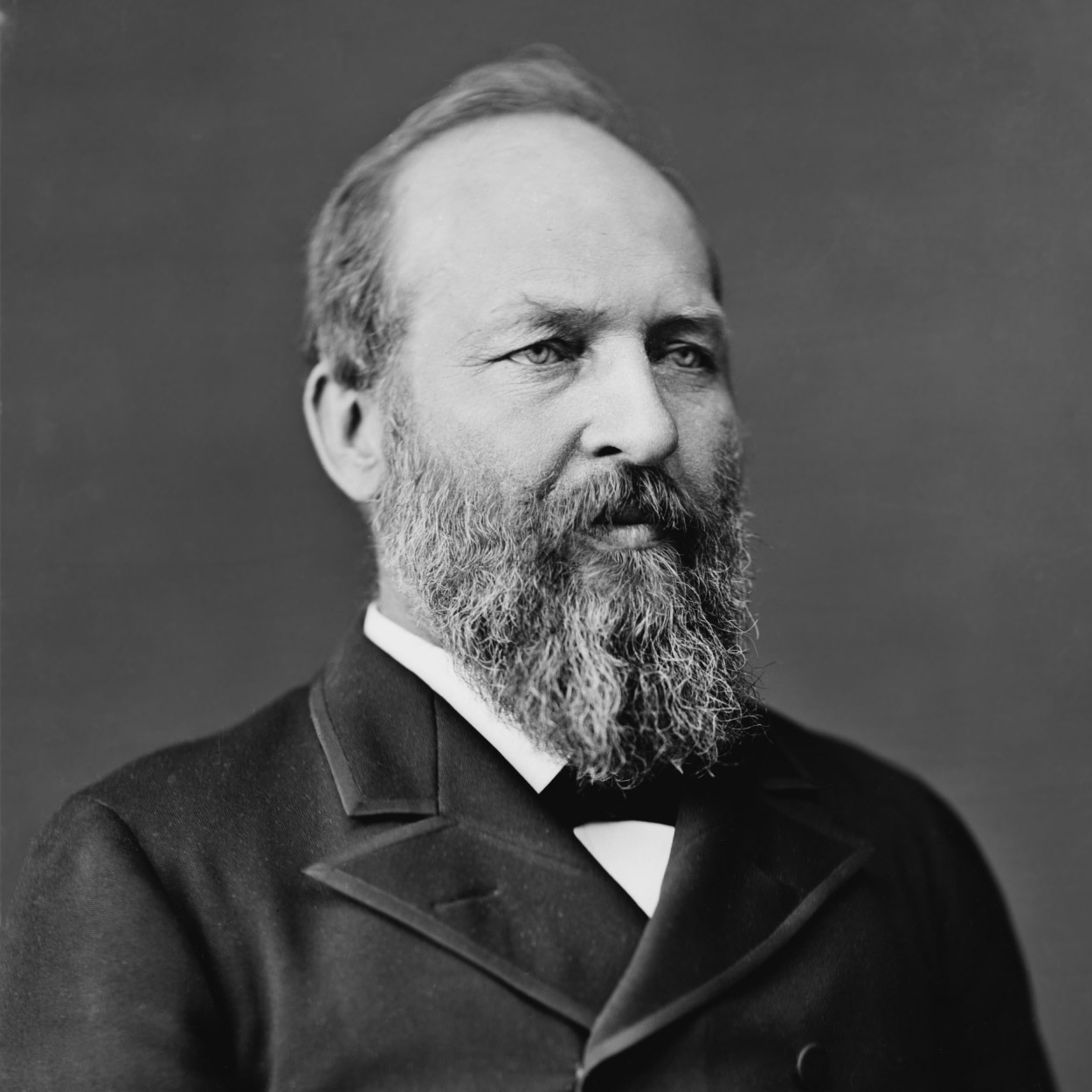 The 20th President of the United States

James Garfield was elected as the United States’ 20th President in 1881, after nine terms in the U.S. House of Representatives. His Presidency was impactful, but cut short after 200 days when he was assassinated.

As the last of the log cabin Presidents, James A. Garfield attacked political corruption and won back for the Presidency a measure of prestige it had lost during the Reconstruction period.

He was born in Cuyahoga County, Ohio, in 1831. Fatherless at two, he later drove canal boat teams, somehow earning enough money for an education. He was graduated from Williams College in Massachusetts in 1856, and he returned to the Western Reserve Eclectic Institute (later Hiram College) in Ohio as a classics professor. Within a year he was made its president.

Garfield was elected to the Ohio Senate in 1859 as a Republican. During the secession crisis, he advocated coercing the seceding states back into the Union.

In 1862, when Union military victories had been few, he successfully led a brigade at Middle Creek, Kentucky, against Confederate troops. At 31, Garfield became a brigadier general, two years later a major general of volunteers.

Meanwhile, in 1862, Ohioans elected him to Congress. President Lincoln persuaded him to resign his commission: It was easier to find major generals than to obtain effective Republicans for Congress. Garfield repeatedly won re-election for 18 years, and became the leading Republican in the House.

At the 1880 Republican Convention, Garfield failed to win the Presidential nomination for his friend John Sherman. Finally, on the 36th ballot, Garfield himself became the “dark horse” nominee.

By a margin of only 10,000 popular votes, Garfield defeated the Democratic nominee, Gen. Winfield Scott Hancock.

As President, Garfield strengthened Federal authority over the New York Customs House, stronghold of Senator Roscoe Conkling, who was leader of the Stalwart Republicans and dispenser of patronage in New York. When Garfield submitted to the Senate a list of appointments including many of Conkling’s friends, he named Conkling’s arch-rival William H. Robertson to run the Customs House. Conkling contested the nomination, tried to persuade the Senate to block it, and appealed to the Republican caucus to compel its withdrawal.

But Garfield would not submit: “This…will settle the question whether the President is registering clerk of the Senate or the Executive of the United States…. shall the principal port of entry … be under the control of the administration or under the local control of a factional senator.”

Conkling maneuvered to have the Senate confirm Garfield’s uncontested nominations and adjourn without acting on Robertson. Garfield countered by withdrawing all nominations except Robertson’s; the Senators would have to confirm him or sacrifice all the appointments of Conkling’s friends.

In a final desperate move, Conkling and his fellow-Senator from New York resigned, confident that their legislature would vindicate their stand and re-elect them. Instead, the legislature elected two other men; the Senate confirmed Robertson. Garfield’s victory was complete.

In foreign affairs, Garfield’s Secretary of State invited all American republics to a conference to meet in Washington in 1882. But the conference never took place. On July 2, 1881, in a Washington railroad station, an embittered attorney who had sought a consular post shot the President.

Mortally wounded, Garfield lay in the White House for weeks. Alexander Graham Bell, inventor of the telephone, tried unsuccessfully to find the bullet with an induction-balance electrical device which he had designed. On September 6, Garfield was taken to the New Jersey seaside. For a few days he seemed to be recuperating, but on September 19, 1881, he died from an infection and internal hemorrhage.